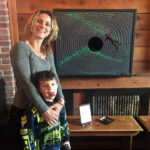 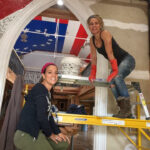 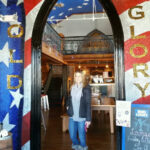 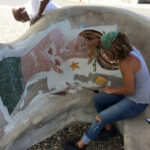 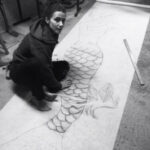 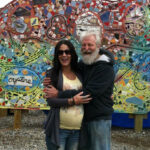 Catherine Galli  was born and raised in Brooklyn for her first 30 years. In 2005, Cat moved to Keyport NJ to start a family.

On a trip to Italy in 1997, Cat stood in awe at the mosaics in St. Peter’s Basilica Vatican, Rome.  Influenced so heavily by this experience, she self educated and decided to completely submerge herself in Italy's mosaics.  It was during this 6 week stay that she worked and studied the traditional mosaic methods along side world renowned artist, Luciana Notturni.  Catherine joined ASK in 2011, and worked under Isaiah Zagar on a 5 day ASK community project, which was later destroyed by hurricane Sandy. In the summer of 2013 she met and practiced more of the indirect method under Cynthia Fisher.

It was that same year as part of the ASK design committee she submitted designs and collaborated with other artists to rebuild and replace the destroyed mural with a more permanent functional mosaic sculpture. Known by most as Cat, responsible for two of her larger pieces in town, “Pearl the Mermaid”  & the Old Glory Restaurant mosaic flag.

Cat is a collage graduate who left Wall Street after four years to pursue a more rewarding career in health and wellness in 2001. Today she also sits on the Keyport Bayshore Business Cooperative board not only as a resident but, as business owner of Stress Free Body Yoga & Wellness Center.